I chose to make this work as I wanted to create a piece that had a connection with Ormskirk.  It follows on from the ship  installation I’d made in 2011 – 300 Viking shops, following a residency last year at Leasowe Development trust on the Wirral. Leasowe had a strong connection with the Vikings.

Although Ormskirk also has a Viking connection and the gallery had expressed an interest in showing that work again, I wanted to create something new for the exhibition.  The exhibition theme was ‘ journeys’ and  I really wanted to make something to do with ships again, but Ormskirk didn’t have an obvious maritime history.  On searching Wikipedia however, I saw that Nicholas Monsarrat, author of ‘The cruel sea’ had lived in Ormskirk at one time.

I bought a copy of the book and began to read….  thinking up what I could do in terms of a artwork.

This installation is made from the pages of two copies of the Cruel Sea – two copies to represent the two ships in the book. 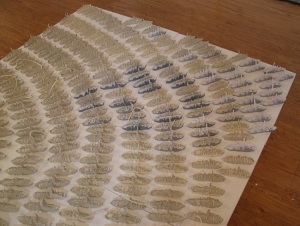 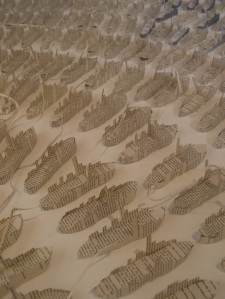 275 Paper ships, cut from the pages of the novel.