I started making these paper houses last year in response to an exhibition about housing. I had many problems with the design though and found that they travelled badly ( got crumpled easily)  So I put them away in a box and left them.

It was only when I started putting together The Cruel Sea Installation and I had to think about making the ships more sturdy and ‘people proof’, that I was able to go back to the houses and  redesign them.

The 400 + paper houses in this artwork represent a possible regeneration of the derelict terraces in Ducie Street and surrounding area in Toxteth, Liverpool.

The demolition of these buildings is highly contentious, with many residents taking the view that the houses are ‘fundamentally sound’  and that ‘renovation would be preferable and cheaper.’

With arts funding cuts greatly effecting public artworks , a question of how we can  sustain the level of art visibility – which has grown immensely due to the popularity of the Liverpool Biennials, with the regeneration of the area.

Each house in this installation is covered with a reproduction of an artwork.

The houses will be shown as part of  Liverpool Light Night : http://www.lightnightliverpool.co.uk/2012/the-spaces-between/ 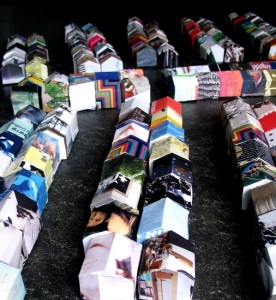